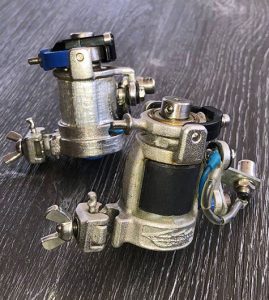 It all started in Auckland, New Zealand in the year 1993. An engineer was visiting his tattooist and close friend Phil Mathias (RIP) when out of the blue his friend’s tattoo machine had a failure. In frustration, he threw it clean out the door.

After diving on the now-useless piece of equipment, our engineer mused over the dynamics of the traditional coil machine. Finally, after much thought, a few beers and a few false starts our intrepid inventor / engineer, Craig Wyeth had a revelation and the Swashdrive tattoo machine was born.

On its first outing, it was putting ink into skin and worked very well. There were a few design flaws and a couple of machining errors, but in essence,` it was alive. Several prototypes and a few years later we started researching the science behind the swash plate (sine wave needle velocity) and why it was doing such an excellent job tattooing, as it had surpassed all expectations.

In 2005 Tony Oliver was working at a tattoo studio at Surfers Paradise on the Gold Coast. One of his fellow artists had been using a Swashdrive for a while and was impressed with its performance. Tony ordered himself one and after some slight adjustments was also equally impressed with the machine.   Never being one to leave things alone, Tony contacted Craig to discuss some possible improvements. Craig was very open to his suggestions and returned a week later with the discussed modifications.

To this day both Craig and Tony with their collaborative efforts have seen the Swashdrive tattoo machine undergo eight distinct evolutions as well as the adding The Whip, The Slide and The Brush to the machine stable.

Today, more than two decades on, there are thousands of Swashdrive tattoo machines being used in the art of professional tattooing. These machines have become renowned for their efficiency and quality craftsmanship.
A fundamental difference

The original Swashdrive tattoo machine was fundamentally different to any other mechanical tattoo machine in use. The mechanism that converts the rotary motion of the electric motor to the reciprocating needle movement is done by means of a swashplate, not a cranking action or a cam action. (With the addition of The Whip in 2010 & Slide in 2012 that changed.)

What is a Swashplate?

The easiest way to describe the swashplate tattoo machine action is to take a large coin, stand it on its edge and give it a spin. As the coin slows from spinning and starts to fall on its side, it gives off a wobbling action. This is known as a swashing action and is a natural phenomenon. In essence, the Swashdrive uses this action to convert rotary to reciprocating action. The swashing action is the most efficient method of conversion to date and in this machine it generates a massive 15:1 mechanical advantage, giving it the ability to drive huge shading clusters of up to 80 needles.

While this machine packs a huge punch, it is also extremely efficient with its ink delivery. The needle velocities of this machine are of a sine wave, meaning the speed of the needles is of a constant velocity. What does this mean for tattooing? Compared to a rotary (cranking action) at the same hits per second (rpm) the needle velocities are 20% slower. So in essence, the machine will operate or work up to 20% faster and have the same impact on the skin. 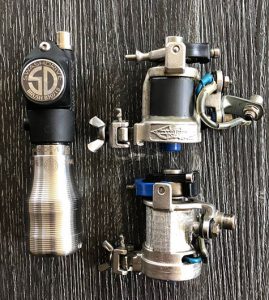 The Swashdrive machine team is continually researching and developing the tattoo machine to further refine its performance and reliability. Our mission is to produce tattoo machine of the utmost reliability and highest quality, so you know your Swashdrive will enable you to do the best possible job – every time.

Check out the latest Swashdrive Evolutions.

PLEASE NOTE: Due to the Corona Virus some countries are experiencing lengthy delays for delivery. Express shipping is being given priority over standard shipping so this may help with faster delivery but even those packages may take longer than normal. Dismiss

Join Waitlist We will inform you when the product arrives in stock. Please leave your valid email address below.